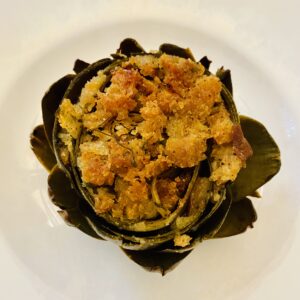 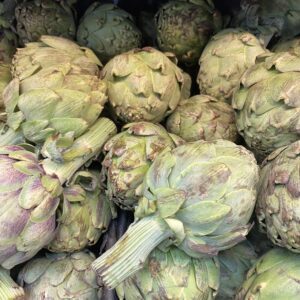 The Artichoke (Cynara Scolymus) has been around for thousands of years.  Today, artichokes are generally grown in Southern Italy and Sicily.  Sicilian artichokes are very tender, and are often roasted over hot coals on the ground and eaten just like that.  Historians cannot agree if it was originally cultivated by the Romans or Greeks, but also used by the North Africans and what is today Syria.  Artichokes most likely were introduced to the rest of Europe through Sicily in the 12th Century.  Catherine de Medici married Louis of France and moved to Paris in the 14th Century, is said to have brought artichokes, (and as most culinary-oriented people know, along wtih many other favorites which is how modern French cuisine got its ‘start’).  However, because of its mythological origin, women seen eating artichokes were considered promiscuous since they were considered an aphrodisiac. 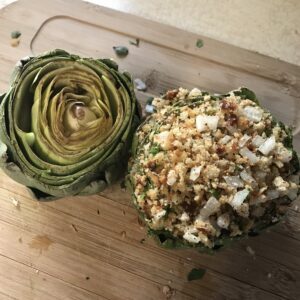 As the legend and myth goes, Jupiter came to Earth and was on his way to see Neptune over by the sea.  Jupiter came across a very beautiful Goddess name Cynara.  Jupiter found love at first sight, but when he went to proposition the beautiful Goddess Cynara, she explained that she wanted to stay on Earth with her mother.  Jupiter was not very happy about the rejection, said he would turn her into a plant filled with thorny, rough leaves that would be unedible, because if he could not have her, no man could.  The last laugh is on Jupiter, because artichokes, though often misunderstood, and often thought to not be the easiest vegetable to cook, can be very simple and are very delicious and are even considered an aphrodisiac by some. And while some celebrity and other chefs will tell you the outer leaves are inedible and only the “heart” of the artichoke once all the leaves and spiny thistles are removed is the best part, the true is much of it is consumable.  You can buy artichoke hearts frozen or canned, even in a jar marinated which goes well with salads since they are preserved in vinegar.  But for a first course of a hot meal, you want it fresh.

The following recipe is a mix of my mother’s recipe along with the famed Lidia.  My mother would use plain white Wonder bread and boil in a pot on the stove.  Lidia braises it in the oven and includes chopped hard boiled eggs.  This recipe is what I would call closer to home, as far as taste/texture, without the over soggy bread crumbs and over cooked artichoke leaves.  While my mother’s were more tender, cooking them in the oven with white wine is really the way to go.

This recipe below should be good enough for 3 or 4 artichokes, depending on the size: 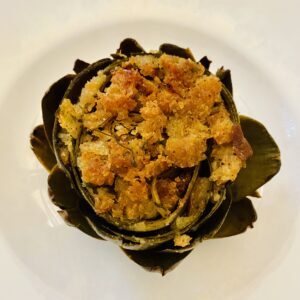 Slice off 1/4 of the top of the artichoke to remove the pointy ends.  Smash (gently) the top so you open up all the leaves, make them loose but do not break it apart. Put the stuffing between all leaves and top with a generous amount of the remaining breadcrumbs, drizzle with olive oil.

Now in a heavy pan like a dutch oven, heat and add some olive oil to the bottom so they don’t stick.  Pour in some white wine along with warm water so they come halfway up the artichoke.  Set the oven for 350F and allow the artichokes to cook for at least 30 minutes. All climates/ovens/temeratures and size of artichoke varies, but definitely within 45 minutes you will have a great appetizer in place of a salad.

How do you eat it? its simple, You take each leave, one at a time and scrape the soft bottom part of the leaf with your bottom teeth.  You continue this way until you get to the center where the leaves are more tender, easier to eat and when you can bite off the bottom part to eat.  Once you get to the center, you want to eat only the tender bottom part of the heart and discard the spiny thistles of the “choke’, that is basically all the good parts you have been scripting off and that is the part which you want to eat.

Another recipe is Artichoke and spinach dip.  This is always delicious crowd pleaser, at parties, especially served with tortilla chips, skip the pita or Italian bread on this one.

NOTES: Artichokes most commonly come into season twice a year, Spring and Fall, the Summer crops are usually much different, lighter in appearance and not as good.  Important minerals provide are magnesium, chromium, manganese, potasium, phosphorus, iron and calcium.  They are a good source of fiber, vitamin C and Folate, in addition to being non-fat, low in salt and no cholesterol. There are basically 2 types of artichokes that we see on the commercial market: those grown from roots, and those grown from seeds.  The ones grown from seeds are the more commercial variety.  Nearly 90% of all artichokes sold in the USA are from California.

Now, there is an acquired taste for a liqueur in Italy known by the name Cynar which is distilled from fresh artichokes with other herbs mixed in.  It is bitter, but it is low in alcohol content and very tasty if you like that sort of thing.  The best thing to drink with artichokes is white wine, champagne, or Cynar on the rocks.