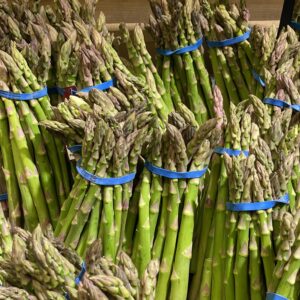 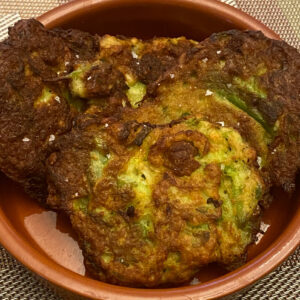 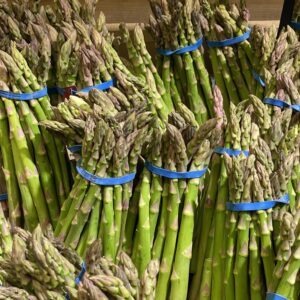 The other day I saw #asparagus trending on Twitter.  I thought for a moment that either they found a recall, it was being cancelled, or was found to be a cure or a cause of a disease.  Ironically, it just happened to be in season. How nice the social media world is giving back these days rather than taking our sanity.

As it turns out, they are in season and on sale really cheap. At my local grocery store they were .88 cents per pound. This recipe requires about 1.5lbs, or, 2 dozen stalks/spears. The bottom is going to be trimmed and discarded, because its too thick and tough to cook/digest.

At the same time I saw Lidia’s Italy came out with a recipe for Asparagus Fritters. As you may know, I am a huge fan of Lidia Bastianich and all her restaurants and shows on Television. This is an adaptation of her recipe that works for me.  This was my first attempt and it came out great. I ate almost the whole batch. It is enough for 4 or more people if you are having it as an appetizer. 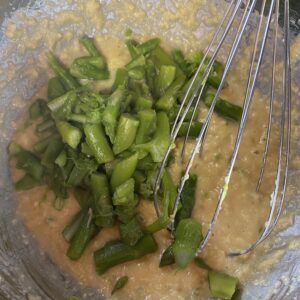 Cut the asparagus to about 3/4 of the way down.  This is the dense/bitter part.  The easiest way to know how far down, is to simply take one from the bunch and bend it until it breaks. That is the part you discard.  Line it up with the others and cut it down to that size.

In a pot of boiling salted water, add the asparagus and cook for no more than about 7 minutes or so. I did it for 9 and it became mushy.  I think 5 minutes is too little but 9 is too much.  It all depends on the thickens of the asparagus.

This recipe would most likely work with any similar vegetable like cauliflower, broccoli, broccolini, or a similar dense green or white vegetable.

While that is cooking, whisk together the eggs, then gradual add in all the dry ingredients such as the bread crumbs, cheese, salt, flour and onion.  Don’t be afraid to add some  black pepper. This is not in the original recipe, not sure why, but it certainly could not hurt.

Once the asparagus is done cooking, pull it from the hot water and submerge in cold water. This will not only slow down the rest of the cooking so they do not become too soft, but it will also cool them off so you can put them on a cutting board and cut them down into 1″ or 3cm pieces. 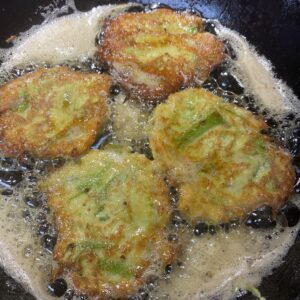 Using a tablespoon measure, put one into the pan of hot oil to cook.  You may need to flatten them out.  I had to try it a few times, but I find that 4 per batch work best.

It is going to take about 2-3 minutes for each side. You will see it get brown on the outside, but don’t get it too brown. As you will find, even if it looks golden, it will continue to cook and fry so that if you wait too long, they will turn too dark and get burned.

After the first batch, I decided to flatten them out a bit, so they cook faster, more evenly and ultimately taste better.  You can get 4 per batch if they look like this.

Once you pull them out of the skillet, put some paper napkins on a plate, set them down, let some of the excess oil drain away, and flip them over.  Then season them with a mere pinch of salt to bring out the flavor.  Do not over salt, and use a better salt if you buy the gourmet kind like Maldon. Outside of that, perhaps a pinch of fresh chopped parsley, but this really needs no sauce or other condiments, just serve them warm – not hot, not cold, warm!