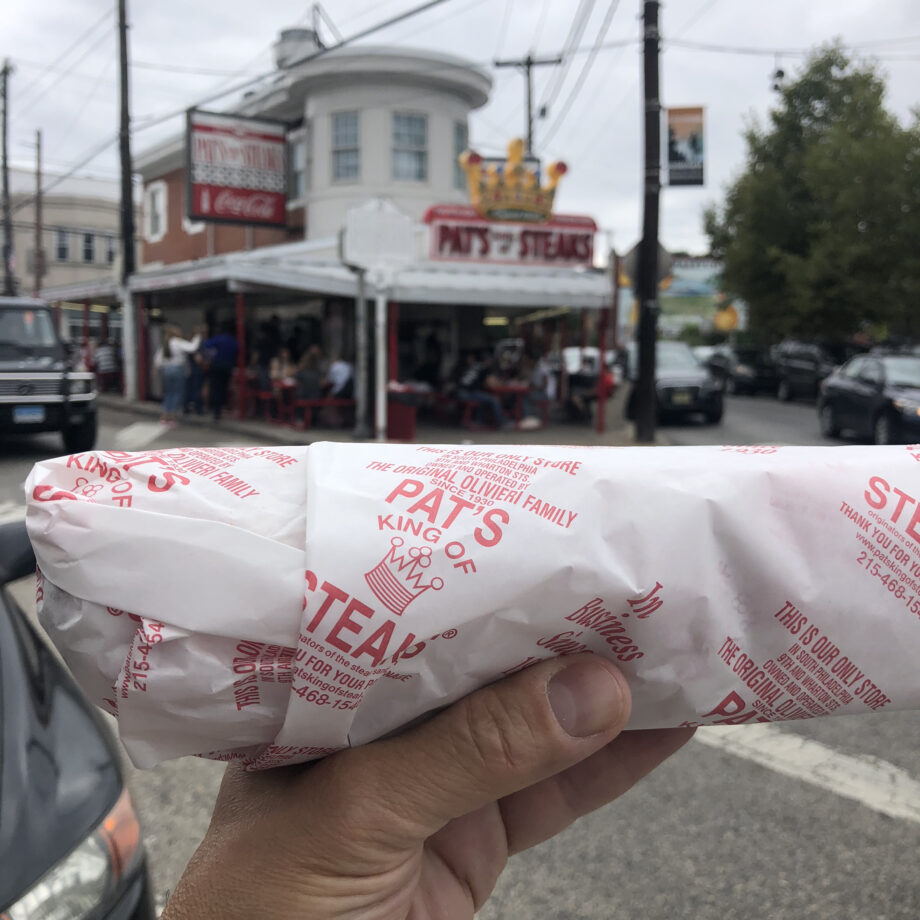 A Tale of Two Cheesesteaks 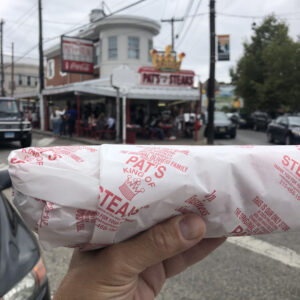 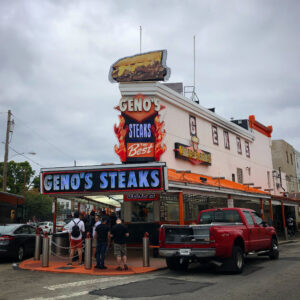 The cheesesteak sandwich was invented by the Oliver brothers in the 1930s for people on the go in Philadelphia, such as cab drivers and people with little time to sit and dine.

In spite of the one of the most popular destination spots in Philadelphia, the best cheesesteak is not here. The two rivals are Pat’s and Geno’s, directly across from one another. I found so many people doing the same thing as me. They bought one from Geno’s, and one from Pat’s, and they unwrapped them and tasted them right there to see the difference. It is a pretty even draw.  One had better seasoned meat, but was tougher, and the bread was not as fresh.  The other had fresher bread and more tender meat, but not as tasty.  I honestly do not remember which was which, but it does not matter. It is just something you have to do when you are in Philly. At the end of the day, most agree, this is not the place for a cheese steak.  Even Anthony Bourdain said the better version is in Jersey, and many will agree, you get a better cheesesteak at the Jersey Shore boardwalk than here.  But enough about that. Here is my version of the cheesesteak which will rival any. This recipe should feed 4-6 people, depending on how much you stuff into each roll. I don’t like it overflowing or falling out of the roll.  It should fit in there neatly. It’s not a Sloppy Joe sandwich, where more of the filling winds up on the plate than in the sandwich.

Cast iron skillet it probably a must here. I say probably, because I have the best success with this, though I know in Philly they are using a flat stainless steel grill.  I don’t like long strips of beef, so I cut and shred it more into smaller pieces.  It should not be like ground beef, but it should not be like fajitas or stir fry either. 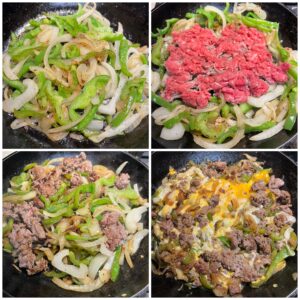 2)  Season the shaved beef with salt, pepper, and some shaved garlic (use a cheese grater).  Season both sides, allow to sit.

3)  Continue to stir the peppers and onions until they are to your desired doneness.  Some like them crispy, but for this, I prefer them caramelized and/or soft.

4)  Turn up the heat a bit, and move the vegetables on to the sides of the skillet to make room, and add the shaved beef. Try to get it seared.  After a few minutes, flip the meat over, and put the vegetables on top.  Continue to fold in and cook until the beef is cooked all the way through.  Rare meat is not an option here, it should be well or well done.

5)  Once the meat is fully cooked, add slices of provolone and cheddar on top.  Once it starts to melt, gently fold it into the rest of the meat and vegetables until the cheese is melted, but not liquid.

6)  Slice the long rolls, heat them up in the oven if you can (not hot but to get them warm), but about a tablespoon of mayonnaise on both sides of the roll.  Add the cooked beef and vegetables, slice the long roll in half and serve!