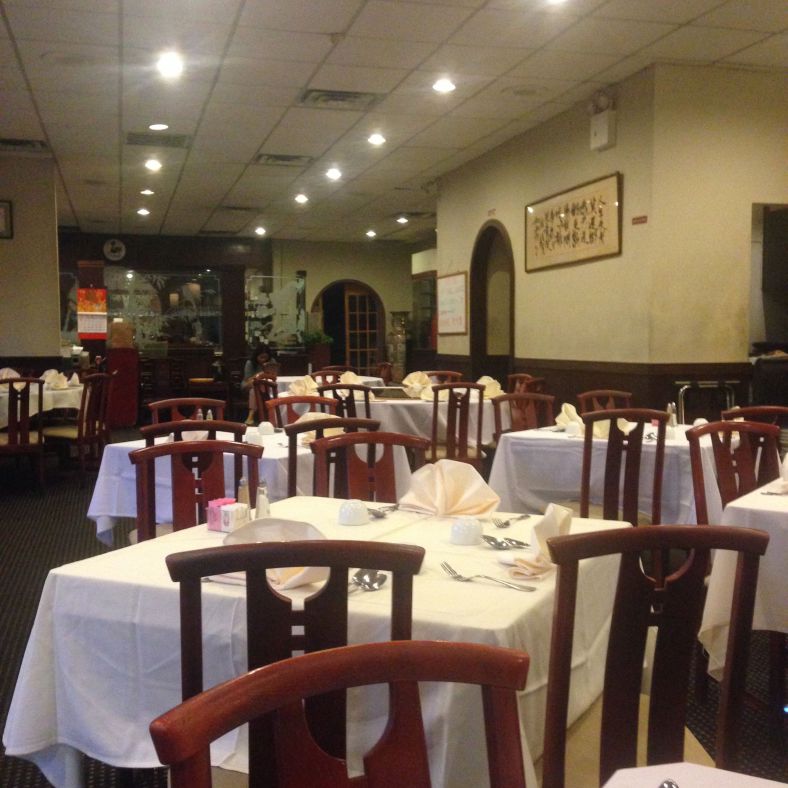 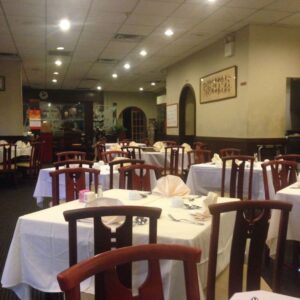 For the longest time I’ve wanted to return here.  It seemed really tiki (at least on the outside) and these places are quickly vanishing for  fast-food and fast casual dining places.  Plus, had been at least 15 years or more.  It’s neighbor Pal’s Cabin, a landmark which I see has already been knocked down and the mega-chain logo has gone up on yes, another square windowless building.  I always will regret not having gone there, even for a quick lunch to have a burger.  There too I had not eaten in many years, but again, it was a landmark, and I can only imagine they went out of business because it was not as great as it once used to be.  Honestlly, I was not even in the mood for Chinese food, but this was the closest place I wanted to go to as I got off the highway.  I had just travelled almost 100 miles in horrific rush hour traffic, and after 3 hours of driving, I knew I was in no mood to cook or get fast food, but it was getting to that point.  That is when I said, go to this place now, it might not be there if you wait any longer.  As it turns out, I wish it had closed before they got $40 of my money.  And, I normally would not say that if it was simply a poor meal, however, it was a very unpleasant experience that all could have been avoided. Not because of the food or service but because of the host himself.

So when I entered, the place was empty.  Its about 8pm on a Wednesday evening so maybe the dinner crowd was gone.  Now all there was an elderly Chinese couple and an elderly man reading a book and who asked for a fork, something unheard of in a Chinese restaurant, but I soon learned why.  Next time I won’t be so quick to judge.

The waitress, friendly enough, delivered 3 menus.  One in English and Chinese, one smaller one, all in Chinese, and a wine list.  I was happy to see on the main menu a full page dedicated to Tiki Drinks, even if half of it was a large illustration.  It lead me to believe we were in for some serious authentic tiki drinks.  Unfortunately it was not the case, even though I was delighted to an authentic tiki mug delivered to the table with the usual staples of hot tea, fried wontons and of course the hot mustard, which I love.

The drink seemed like it had quite a punch, but maybe that is because the drink was not properly mixed.  It certainly did not contain the ingredients it claimed to on the menu.  I’ve seen this before, the guy running the cash register is also making drinks between tasks.  They must think that you just mix any rum in with fruit juice and it will fly.  If the the customer orders a different drink, just add less juice, a splash of soda, maybe light rum instead of dark rum.  But there is no consistency and they really all taste the same. Not the only thing misspelled on the menu (including “unions”), the “Mai Thai” they claimed to be the best.  However, I wanted something different I normally would not mix at home.  So I got something called the Satellite which listed fresh lime juice, rum brandy (whatever that is, unless they forgot to put a comma after rum and brandy), coconut milk and perhaps something else, I can’t remember.  It tasted like light rum with Rose’s lime juice, and when I brought some up from the straw it looked almost completely clear, just slightly cloudy.  No taste of coconut, certainly no fresh lime juice as there was no pulp,  and of course the drink was 75% ice.  There was $8 wasted.   I told the waitress I would stick with the tea for dinner.   Trust me, I really wanted another drink, especially since 1980s music was playing (with commercials), that alone is enough to turn me off. Three lame 80s songs, 3 mins of commercials, 3 more lame 80s songs I hate, more commercials, etc.

There were no combination dishes.  And, everything seemed a bit pricey.  Rice started at $10 and all the other dishes were upwards of $15.   The portions were large and can easily feed two.  However, I wanted to taste the ribs.  This is always one of the litmus tests for a Chinese restaurant.  Again, disappointed.  The meat tasted gamey and the sauce simply was too sweet and even dominated any flavor (if there was any at all) of the sauce itself.  I liked the cute panda dish they brought it out in though.  That red stuff?  Its worn off Chinese characters.  Another indication that they need updating.

So the food finally comes.  Tangerine beef.  One of my favorites and its not breaded and deep fried (which I hate).  Its got real pieces of chills and caramelized tangerine rinds.  However, now it dawns on me why the elderly man reading a book asked for a knife.  The pieces were enormous, at least 2″wide and 5″ long.  Anyone that knows anything about Chinese food is that its all supposed to be able to be in small enough pieces to cook fast, be easily picked up with chopsticks and obviously in bite-sized pieces. It does not mean they all must be perfect 1″ cubes, but it should be fairly close.  The sauce was so thick it was more like honey or syrup.  I considered asking the waitress for a fork.  I was thinking that maybe the light would go off in her head that if two customers asked for it in one night, she might report it back to the kitchen and they should start making the pieces more like Chinese food and less like enormous fajita-sized strips of beef like that chain up the street.

It was at that moment when I looked up to see if she was there when I heard the man up at the front desk yelling at someone in Chinese.  It got louder and now all 3 parties were looking up when the man broke into his native Chinese dialect inserting “Mother F” and some other choice words every other phrase.  Then a man came in and it sounded as if he had perfect English but perhaps with a slight Israeli accent saying “you should be ashamed, you are a coward yelling at a woman like that, even more for ripping people off” – I am guessing they ordered takeout, they got sticker shock (the way I did) and then she refused to pay for the food, which is wrong, no doubt, but that does not justify the man causing a disturbance, verbally abusing a woman and disrupting and already miserable meal for all 3 diners.  Lesson for the woman, ask for the price before you get off the phone, if its too much, say “cancel the order”.  Lesson for the guy at the register, exercise some constraint, and once its over, don’t go back into the kitchen and vent with the chef at full volume while we are trying to dine.

No exaggeration, this went on for at least 10 minutes, him in the dining room, going back to the kitchen, yelling, coming out yelling some more, etc.  Honestly, I was ready to walk out.  But that would be wrong too.  I asked the waitress to pack up what is left and when she disappeared for more than 5 minuets, I left $40 on the table.  The bill was $33 and something cents. I didn’t have anything smaller than a $5 on me.  I could have waited for change from the $40 and taken out a dollar or two to leave her 15%, or I could just give her 20% and get the hell out of there.  I was so anxious I didn’t want to wait for the angry old man to calm down and come back from the kitchen to process the credit card, so I left two $20 bills on the table and walked out while the waitress was still in the kitchen doing whatever it was that was keeping her out of the dining room waiting on customers.

I’ve made it my personal policy not to post negative anything.  However, this was so completely unprofessional and uncalled for, that I need to warn my fellow Tiki lovers who might be lured here, and quite frankly, when you are in the hospitality business that means being hospitable.  Yelling, screaming and cursing out a woman (or even a man) in a restaurant full of diners is deplorable.  Reading the reviews online leads one to believe that its authentic (which it might be, I didn’t sample anything from the Chinese menu), but you can clearly see those reviews were from 5 years ago and the place has gone downhill.  And, at those prices, they should be able to mix a drink, and the quality of the food should be of the highest standard.   As my father would say, “take a good look at the inside of this place, because its going to be the last time you see it”.  Such a shame really, and it pains me to say this, but it needs to be destroyed and paved over for another Starbucks.