By all accounts this is a tiki bar that you must visit if you are in Las Vegas.  Even if you are not into tiki, its a bar off the strip that is open 24 hour every day. 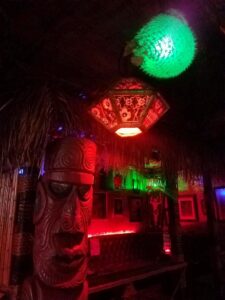 Their website does boast “Drink, Smoke, Escape”.  They are not joking. No matter what time of day or night, you can expect it to be pitch dark in there.  If you come during the day, its a rude awakening when someone opens to the door to enter, its almost as if Dracula has been blinded.  In the same respect, if you don’t like second hand smoke, don’t plan on staying for more than one drink.

Unfortunately I have not yet had a chance to visit, but two of my friends visited about a year apart. The complaints they both had were, in addition to being smoky (smoking is allowed in Vegas) and the service is less than great, and the staff seems less than apologetic (one friend told me the bartender didn’t even ask if they wanted another round).  The one thing they both agree on is that the drinks are very good.

Their signature drink, Tiki Bandit which is described as “A jackpot of rums with pineapple juice, passion fruit syrup, and blue Curaçao. “This dreamy nectar will keep you rolling in sevens”. And of course, its served in the signature Frankie’s Tiki mug shaped like a slot machine.  Her husband opted for the Malekula, which is described as “A glowing elixir prepared with coconut rum, Tuaca, melon liqueur, and pineapple juice. “The perfect refresher for the perfect buzz”. 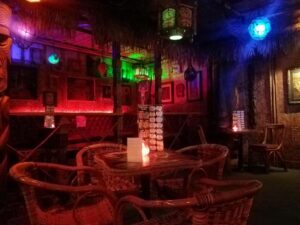 They still have CD jukeboxes and old movies playing on the television screens behind the bar. “Mad Doctor of Blood Island” from 1968 was on the screen, but there was also surfer music in the background. While some tiki aficionados might question music over exotica, for me, its perfectly acceptable. But in a place like this, if you don’t like the music, you can certainly change it with a cash-operated jukebox.

The decor is totally tiki, from the puffer fish hanging from the ceiling to the tikis, bamboo and thatch, and all the other tropical and oceania artifacts you could expect. 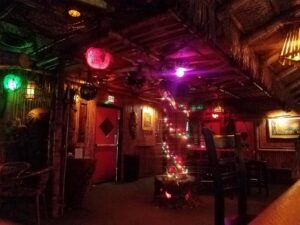 It was definitely an experience to be had, if you can withstand the second hand smoke. It is definitely worth stopping into just to have one drink, even just to say you were in one of the Vegas bars that Anthony Bourdain also had visited.