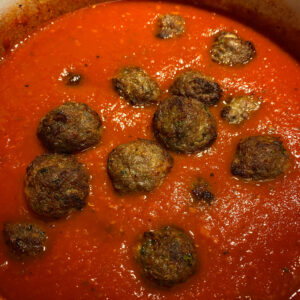 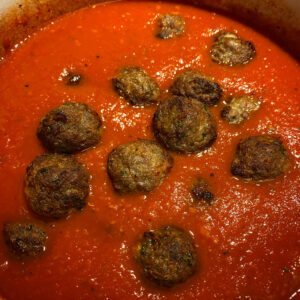 Sunday Gravy, meat sauce, or, the “Red Lead” as the character Tony Soprano used to call it.  My family too came from Newark, directly off the boat from Sicily.  Honestly, I never remember the “is it sauce or gravy” argument.  We knew what it was, so if one family member called it gravy, or another sauce, it didn’t matter. You just shut up and ate. 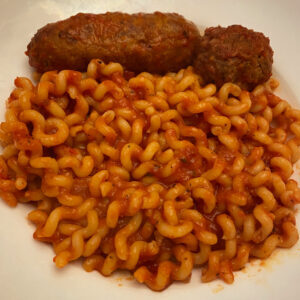 “Is it gravy, or sauce?” For those of you who must know the “correct” answer: it is whatever your mother or grandmother called it.  End of story.

So why do some call it sauce and others gravy?  Technically, anything made with meat is a gravy, regardless of the color.  Anything without is sauce.  Now if your grandmother called it sauce, it is probably because she did not speak English and just called it what she called it because didn’t know the proper words.  So, just leave it alone.  Only a fool argues with a Sicilian woman in the kitchen when she is holding a knife.

There is a scene in The Godfather Part I when Clemenza is showing a young Michael Corleone how to  make “sauce”.  One thing that made me shirk is when he adds a large amount of sugar to the pot.  I’ve never seen anyone in my family add a “sweetener” and thought Coppola and Puzo were doing an injustice to authentic Italian cuisine.  As it turns out, they were historically and technically accurate right down to every detail.

At that period on time, Italians that came over from Europe found tomatoes in the United States too acidic. The only way to offset that acidity was with sugar (just as with cocktail mixology). Its not just a sweetener, it neutralizes that acid.

Today, we don’t really need to do that.  Agriculture has come a long way, and we have nutrients for the soil that would have otherwise made tomatoes that do not taste as good as they did half a century ago. 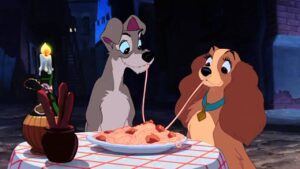 “Spaghetti & Meatballs is/are not Italian”
Spaghetti is Italian, meatballs are Italian.  So yes, it’s Italian.  While it is true you will not typically find spaghetti and meatballs served together in Italy, that does not make it any less Italian. In Europe pasta was served separately and meatballs were served alone with sauce, or over polenta.  For over 100 years, Italians in the United States have been eating spaghetti and meatballs on the same plate for the same reason above.  Scraps of meat were added to the sauce to make it taste better, and less acidic.  Over time as money got better, they started to add better cuts of meat like sausage, meatballs, braciole, etc. Meat was usually only served on Sundays and Holidays.

RECIPES
Now I’ve gotten past the trivia, let’s get down to the recipe. This is how my family made it. My mother was one of nine and I am sure there were variances from sister to sister, but this is the recipe I know. And to be perfectly honest, I do some things differently than my mother did.  I have her handwritten recipe, but as you can see, there is really not too much details, no real measurements, and everything was done by eye. Just as I do, just as many do. 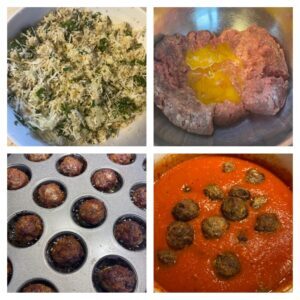 While I’ve listed the traditional ingredients, I tend to not use a mix of chopped beef, pork, veal or lamb. I use grass-fed chopped beef. Its healthier and let’s face it, factory farming was not the tragic reality today that it was 100 years ago. I think if some of our Italian immigrant ancestors were alive today, they would opt or exclude several cuts of meats that come from animals flooded with antibiotics, feed, corn, etc.  Cows eat grass in the wild.  So this is what I am going to use.

The next biggest debate is whether to fry them like grandma, or just bake them. For some, baking is unheard of. However if you give it a thought for a minute, it is a much better method for several reasons. First, if your oven is set at 400F, it will stay at 400F no matter how many meatballs you put in, it will not drop the temperature of the oven, and if it does, it will come back up once you close the oven door.  So no external thermometer needed like with frying.

With frying you are obviously using a lot more oil, and they are absorbing more oil.  With baking, you use no oil, but if you are using a 80% to 20% fat/lean ratio, all that oil that would have melted and ended up back in the pan of olive oil anyway.  In this fashion, using a mini muffin tin allows each meatball its own little individual “fry pan” or bath. So essentially they are still frying, but in the oven they cook in a more consistent and even manner than in a big frying pan. 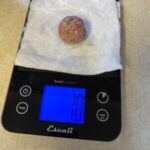 The final advantage to using a mini muffin tin is controlling the size for consistency, not just in portion but cooking times as well.  If you are going to use these as “cocktail” appetizers, I make them about 1 ounce each (30 grams). If its for dinner, I make them 1.5 ounces each (45grams). Yes, I even use a kitchen scale, but if you do this enough times you know in your hand the feel and size of each so by the end of the batch you won’t need to weigh each one individually. The other reason I do this is for freezing. I know how many meatballs I am going to get, eat the day of, and how many I can put in the freezer for future meals.  It always sucks when someone is shorted a meatball (or even yourself), so I like to be sure I have portions accurate.

Set oven to 400F and cook for at least 20-25 minutes on one side, flip them, and allow to cook another 10 minutes and/or until deep brown, NOT black. Once you take them out of the muffin tin, place them on a plate lined with clean paper towels to drain that extra grease you really don’t need in your sauce (or gravy).

INGREDIENTS: Sausage, Hot vs. Sweet
I never, nor would I, ever make my own sausage. Its too much of a mess and I don’t even love it that much.  So sausage should be of the very best quality. So select one you love, sear it in the pan, get it brown on all sides, and add it into the sauce of the same, or different pot. If you include it in the same pot as the meatballs, it will effect the flavor. That does not bother me, but it might bother some. Hot sausage simply means red chili flakes are in the sausage. There is no such thing as “sweet” in Italy, its either hot, or it’s not.  If you do both together in the same pot, it might effect the flavor.

INGREDIENTS: Braciole
Braciole is a rolled piece of meat filled with everything the meatball would have. It is usually the prize of the plate, there was rarely more than one, and either the head of the family got it (like grand dad or dad), or it was shared.  If you make one large one, you can easily cut it into 4 pieces so everyone can have a bite.  Be sure to wrap it tight, and secure with cooking (cotton string) or toothpicks.  Cotton string works best.

As always, prep is the most important part of this process.  Get everything out, and in front of you before you start.  Have it measured, then you are ready to work like an assembly line, rather than haphazardly rushing around the kitchen for something you can’t find or might have forgotten half way through the process.  If you forgot something, now is the time to go to the neighbor, or the store, and get it before you begin.

Olive oil goes into a heavy bottom pot like a Dutch oven.  Add a pinch of red pepper flakes, onions, garlic, then after a few minutes half a glass of wine to deglaze. Add in the tomato paste, allow it to cook/caramelize.  Lastly add in the crushed tomatoes.

Once the meatballs are done, add those, and continue to cook for at least 2 hours.

The last ingredient, is of course, the pasta.  It would be whatever type you like. It can be spaghetti, penne, rigatoni, whatever you like or have on hand, as long as it is a larger/longer type to grab all that sauce that you just spent all day cooking.